There now, it is all over! Blessed rest. 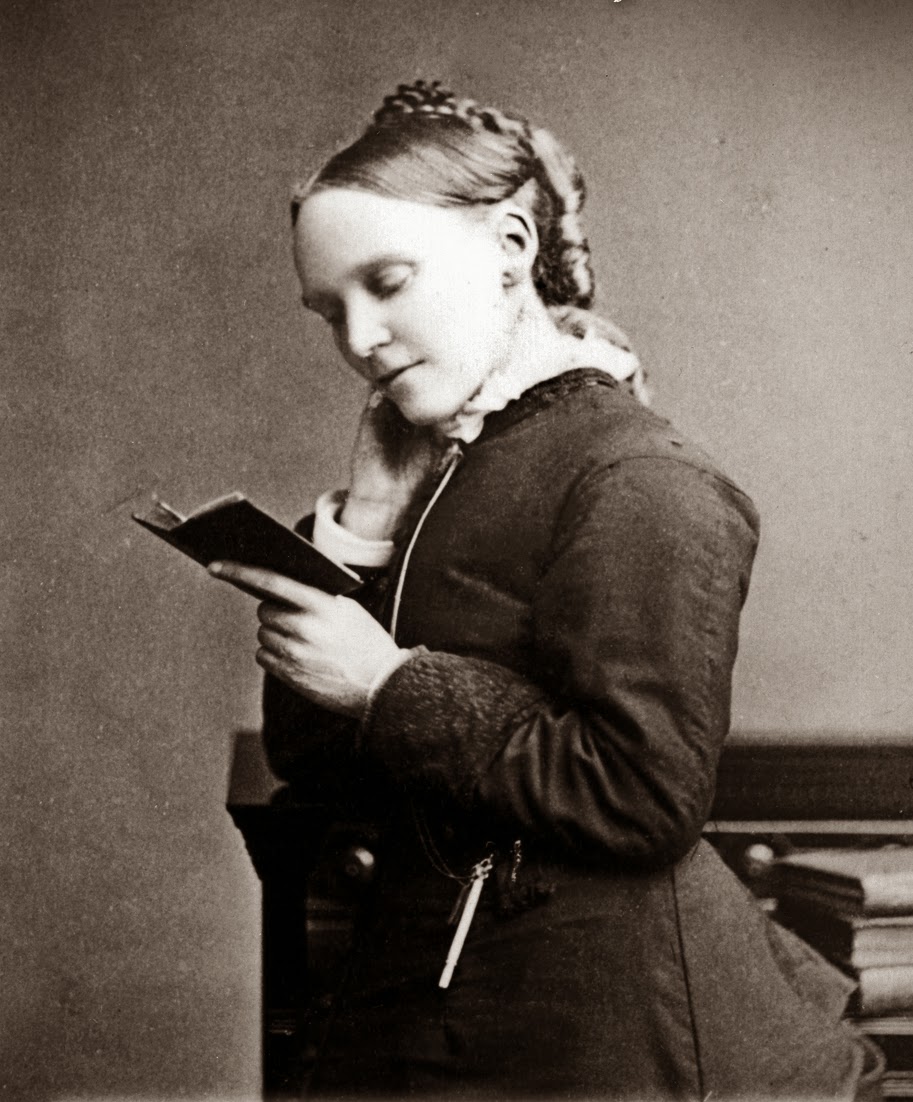 On this site, I have shared many testimonies about people who have gone to hell.  These testimonies are given to us by the mercy of God to keep us from going to that terrible place. However, today I would like to share a story about a dear saint who made it to heaven.  Her name was Frances Ridley Havergal.

The passages I am about to share about her have been excerpted from two excellent hymnals our children have sung from for many years, called Hymns for a Kids Heart: Volumes One and Two, as well as an excellent book I highly recommend, called Voices from the Edge of Eternity, complied by John Myers.

The Girl with a Treasure
What would you say is your greatest treasure? Do you have a toy or a piece of jewelry that you especially value? Let me tell you about a girl who had a wonderful treasure. It was a treasure inside her heart. Long ago a talented young girl was born to a minister and his wife in England. They named her Frances Ridley Havergal, and she surprised everyone with her musical talent. From the time she was very small she could sing like a beautiful songbird. When Frances was only seven years old, she began to write verses. She studied piano and was so gifted that people started asking her to play and sing at concerts.

Besides being a brilliant musician, Frances was captivating and delightful. People loved to be around her. She had a special enchantment about her, and everyone found her irresistible. Can you imagine why she was so pleasant? I'm going to tell you her secret. Frances wrote down her formula for her pleasing personality in one of her journals.

It's really very simple. She prayed for everyone around her. Oh, it was not an out-loud prayer, and the people she prayed for never even knew she was asking God to bless them. They just felt it. There was something so grand about being around Frances—it was the love of Jesus being poured over them by this little girl. As she played with her friends or talked to adults, she was secretly asking God to work in their lives and give them special thoughts.

Once Frances went for a five-day visit to a house where there were ten people. She noticed that some of them were “not rejoicers”, and some didn't even know about the love of Jesus. She decided to spend her vacation praying for each of the ten people in the house and watch what God would do to change their hearts. Do you know what happened? Frances wrote in her journal: “He gave me this prayer, Lord, give me all in this house! And he just did. I left the house, everyone had a blessing. The last night of my visit I was too happy to sleep.”

Just imagine—everyone in the house was different because one little girl decided to pray. And God didn't forget to give Frances an extra-special gift too. For that very night when she was so happy she couldn't sleep, all the verses of the hymn “Take My Life, and Let It Be” rang in her head, and she wrote them down. This is the treasure God gave to her. And you and I can memorize this prayer and keep it in our hearts wherever we go.

Now you know a very special secret. The next time you are around people who are not “rejoicers”, you can pull out this treasure from your heart. You can pray for them. It will be fun to see what blessing God sends to them. Maybe smiles will be on their faces when you leave instead of frowns. They you'll be like Frances. And you may be so happy that you won't be able to sleep!

The Girl with Heaven in Her Heart
You could say that Frances Ridley Havergal knew how to bring a little heaven to earth—her family, her church, and her friends. Maybe it was because Frances thought so much about heaven and tried to listen carefully to God's voice. No one could resist her sweet disposition, because Frances thought of others and not only of herself.

Such a melodious voice had never been given to a more tenderhearted and dear girl than Frances Havergal. People loved listening to her clear, musical little voice. Frances's parents knew she had been given a wonderful gift. Music filled her home, and Frances loved to sing and harmonize with her daddy.

When Frances was old enough to read, she took music lessons and happily practiced every day. Her voice and piano teachers were just as impressed with her hard work as they were with her lovely talent. Even though she was quite young, Frances could have become a rich and famous singer. Wisely, Frances made a better choice.

Frances also loved writing poems and started singing the rhymes she composed. It would have been natural for a girl as gifted and sparkling and likeable as Frances to be conceited and think only of herself. But not Frances.

Instead of bragging when people told her what a beautiful voice she had, Frances had a winsome way of turning the glory to God. “I sing only for Jesus,” she would say softly.

Frances knew she must ask God how she should use her talent. Her special concern was for people who didn't know about Jesus. Before she sang, Frances would pray for the people who would be listening.

And Frances had a generous heart. That's why she was able to bring a taste of heaven to some grown-ups in her church. Once she heard that some missionaries needed money to continue their work. Frances went home and gathered some of her most valuable possessions, including her favorite pieces of jewelry, and mailed them to the church. She tucked a little note inside the box saying that she would be extremely delighted if her treasures could be sold and the money given to the missionaries.

Because Frances unselfishly prayed for her friends, they too could feel the warmth of her heavenly heart. She would send hopeful messages and rhymes that she had written to cheer them up. Once, to celebrate the New Year, Frances sent a greeting to all her friends that read:

Another year is dawning, Dear Father let it be,
On earth, or else in heaven, another year for Thee.
A Happy New Year! Such may it be!

Wouldn't you love to get a note like that? You can imagine that everyone treasured her poem-notes. They were bright greetings from the girl who had heaven in her heart.
One of the most beautiful hymns that Frances wrote will make you want to jump right into the wide river of God's peace. “Like a River Glorious” will bring a bit of heaven into your heart. It says so many wonderful things about Jehovah God that you will find yourself counting your blessings here on earth. Then you will know a secret for bringing heaven to earth.

Yes, Frances was able to stir up a lot of joy everywhere she went. She would tell you that the best decision she made was to follow God's path instead of using her talent to bring attention to herself. And she was happy her whole life because she was following Jesus. Even though Frances lived a long time ago, her hymns can make us happy right now. When you smile and sing this hymn, you will bring a little heaven to someone on earth!

“There now, it is all over! Blessed rest.”

This holy woman of God was born at Astley, England, December 14, 1836. She was the youngest daughter of Rev. William H. and Jane Havergal, her father being a distinguished minister of the Episcopal Church. She bore the name of Ridley in memory of the godly and learned Bishop Ridley who was one of the noble army of martyrs. Many have been greatly helped by Miss Havergal's writings in both prose and verse.

She died at Caswell Bay, England, on June 3, 1879. A short time before her death she said to her sister Ellen, “I should have liked my death to be like Samson's, doing more for God's glory than by my life. But He wills it otherwise.”

Ellen replied, “St. Paul said, 'The will of the Lord be done,' and, 'Let Christ be magnified, whether by my life or by my death.'”

I think it was then my beloved sister whispered, “Let my own text, 'The blood of Jesus Christ, His Son, cleanseth us from all sin,' be on my tomb. All the verse if there is room.”

She said to her sister, “I do not know what God means by it, but no new thoughts for poems or books come to me now.” At another time she said, “In spite of the breakers, Marie, I am so happy God's promises are so true. Not a fear!”

When the doctor bid her good-by and told her that he thought she was going, she answered, “Beautiful, too good to be true! Splendid to be so near the gate of Heaven! So beautiful to go!”

The Vicar of Swansea said to her,”You have talked and written a good deal about the King, and you will soon see Him in His beauty. Is Jesus with you now?”

“Of course,” she replied, “it is splendid! I thought He would have left me here a long while, but He is so good to take me now.”

At another time she said, “Oh, I want all of you to speak bright, bright words about Jesus. Oh, do, do! It is all perfect peace. I am only waiting for Jesus to take me in.”

Then, a little later, she sang the following stanza:

Jesus, I will trust thee,
Trust Thee with my soul:
Guilty, lost and helpless,
Thou hast made me whole.

With deep feeling she emphasized that last word, “me.”

The parting scene is graphically described as follows:
There came a terrible rush of convulsive sickness; it ceased, the nurse gently assisting her. She nestled down in the pillows and folded her hands on her breast, saying, “There, now it's all over. Blessed rest!”

Then, all at once, she looked up steadfastly, as if she saw the Lord—and surely, nothing less heavenly could have reflected such a glorious radiance upon her face. For ten minutes we watched that almost visible meeting with her King. Her countenance was so glad, as if she were already talking to Him.

She tried to sing; but after one sweet, high note, “He--,” her voice failed. As her brother commended her soul into her Redeemer's hand, she passed away. Our precious sister was gone—satisfied—glorified—within the palace of her King!

Author's note: You are invited to read or listen to more amazing testimonies of the supernatural like this below.  You may access my complete blog directory at "Writing for the Master."

Len Lacroix is the founder of Doulos Missions International.  He was based in Eastern Europe for four years, making disciples, as well as helping leaders to be more effective at making disciples who multiply, developing leaders who multiply, with the ultimate goal of planting churches that multiply. His ministry is now based in the United States with the same goal of helping fulfill the Great Commission. www.dmiworld.org.
Posted by Len at 9:15 PM No comments: