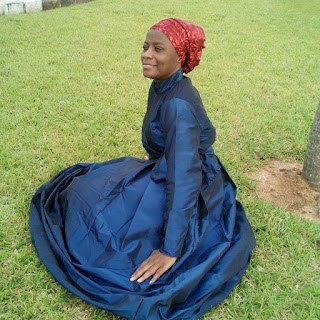 In my previous articles, Godly Attire and Adornment -- Seven Divine Revelations, and Garments of Godliness, I have written about sister Claire Andoun from Cameroon, who was a dear sister in Christ that preached the biblical message of complete holiness. On May 10, 2017, after a brief illness, she passed from this life into glory. She was a friend of mine, and many others around the world as well. She will be missed by all who love her, and I send my sincere condolences especially to her husband, children, and parents. She left behind a seven year old, a ten year old, and a thirteen year old child. May the Lord comfort them in their loss.

She was a woman of faith and action, who was gifted by God in many ways, including musically, and He used her to proclaim His message to the world. She was a praying woman, who had some awesome experiences with God, some of which I have written about in Claire Andoun Solomon's Encounter with Jesus.

She had founded and led a ministry called Virtuous Women in Christ (VWC). Meanwhile she had been part of the Holiness Revival Movement Worldwide (HOREMOW), but left that organization after a few years over issues she had with its leader Paul Rika, and her belief that the Lord was leading her to start her own ministry. For more about HOREMOW, please see my articles HOREMOW Issues and Concerns and Exposing the Darkness within HOREMOW.

After leaving HOREMOW, she continued to carry on with her VWC ministry from her home base in the UK, traveling and preaching internationally in various countries of Africa as well as the Middle East. Regrettably she followed Gabriel Doufle from Togo, Africa, about whom I have written an article regarding my issues and concerns. One of the concerns I had with him was that he prophesied to sister Claire around December 2015 that she must marry a well-known Kenyan preacher named Dr. David Owuor or else she would perish in hell. Nevertheless, she did not marry Owuor, but continued on with her ministry, and in 2016 she founded Complete Holiness Missions International (CHMI). For more about the man whom she called "Daddy" and with whom she associated closely, who has been spreading false reports about her since her death, please see my article, Gabriel Doufle Issues and Concerns.

God did some amazing things in her life, especially in the period just before she died. She moved to Nigeria in late 2016, started CHMI, and was later married to an evangelist named Solomon on April 6, 2017. On Resurrection Sunday, April 17, 2017, she received a dream from the Lord about the rapture, which I have written about in Rapture Revelation to Sister Claire Andoun Solomon. On April 22, 2017, she had a supernatural encounter with the Holy Spirit during intercessory prayer with her husband, in which they were taken in the Spirit to set Christians free from terrorist prisons. I have written about that in my article, The Bodily Form of the Holy Spirit. On April 28, 2017, she posted a video on her Facebook page with the good news about the upcoming launch of her new TV program called Complete Holiness Broadcasting Network (CHBN), which launched on May 1, 2017.

Following that video on April 28th, she became hospitalized for about two weeks with the illness from which she died on May 10, 2017. News of her death left many who knew her wondering why she died prematurely, and whether she may have been the target of a spiritual attack of some kind from the enemy. Her sudden death certainly seemed suspicious, especially in light of the negative words Gabriel Doufle spoke over her concerning marriage. In fact, because of his prophecy, some may have even wondered whether she made it to heaven.

Then on May 11, 2017, the day after she passed away, a sister in Christ in Norway, who did not even know sister Claire, had a vision of her during prayer, and the Lord identified the woman she was seeing in the vision as sister Claire. Here is her testimony:

"Jesus loves us in His kindness and He wants us to love Him back. With this, I have a great vision to share with you this morning that concerns Evangelist Claire Atongo Andoun, that died yesterday morning. This morning (11-05-2017), as I was praying around after 7:00 AM, it got to a point where the Holy Spirit gave me this vision where I saw Evangelist Claire. She is in glory and I saw her. I did not know her before; it was just yesterday that I saw her on Facebook for the first time. It was when I opened my eyes that the Holy Spirit told me that she is Evangelist Claire.

Immediately after that, I saw the angels in heaven worshiping, and heaven is rejoicing for her. Later, the Holy Spirit gave me a Scripture - Matthew 6:34 - saying that 'she did not worry about earthly things, and that was why I took her.' Then I saw angels preparing a throne for her.

As I continued reading, God gave me another vision.  I saw the cloud opening into two and Evangelist Claire walking on the narrow road and she tied (covered) her hair. Then at the end she turned and said ‘Bye bye.' Then I opened my eyes.

With this, I want to say that God is great and I am happy for her because she made it to heaven. To conclude this, when everything was finished, the Holy Spirit told me to call Evangelist Margaret Amure and I did; I have spoken to her this morning.  Please brethren, share this if you love Jesus. God bless you".  From Sister Esther Braibo (NORWAY).

Then I received the following testimony of a revelation about sister Claire that was given on May 12, 2017 to a brother named Anaele Chiedozie:

"During the Facebook live ministration yesterday, as I was about to conclude my ministration about the divine revelations of the rapture given to me, I paused a bit while I was live, because my eyes were widely opened up into the spirit world. Then I saw great trouble upon the earth. I heard a voice say to me while I was live on Facebook, tell them to prepare. Immediately I looked up to heaven and then I saw Evang. Claire Atongo Andoun with a white wedding dress, almost similar to the one on her marriage picture. I don't know her so well, but we spoke for the first time some few weeks back, because she complained to me of her bad network in Lagos.

'WE ARE WAITING TO CELEBRATE YOU ALSO.'  This was in reference to the sister, that had just made it because there was great celebration for her.

Am not used to sharing revelations of people I don't know too well, but I believe the Lord is showing me this for a purpose.

The devil thought that by trying to kill Jesus or the apostles or prophet of old, that all his troubles were over but in all things God uses them for his glory. CHRISTIANS MUST BE VERY WATCHFUL AND PRAYERFUL. God can allow wicked demonic powers prevail over a Christian, sometimes due to carelessness but if they truly died in the Lord, making heaven won't be a problem. Rev 21:4.

Since this article was written, there has been yet another Revelation of Sister Claire Andoun in Heaven, which I encourage you to read.

These are wonderful testimonies! Praise the Lord! Our sister Claire has made it on into glory, to her eternal home there, and the Lord gave a vision to a woman who did not even know her, in order to confirm it. He also gave another vision to a brother in Christ who did not know her very well and had only spoken to her once before. For those who question the message and the ministry of sister Claire, let this be a sign to them that she carried the message of the Lord and was pleasing to Him. She fought the good fight. She kept the faith. She has finished the race. Now there is laid up for her a crown of righteousness that shall never fade away. May she rest in peace.

Author's note: If you enjoyed this post, you may also like Revelation of Sister Claire Andoun in Heaven, Claire Andoun Solomon's Encounter with Jesus, Godly Attire and Adornment -- Seven Divine Revelations, Garments of Godliness, Rapture Revelation to Sister Claire Andoun Solomon, The Bodily Form of the Holy Spirit, The Marine Kingdom and Queen of the Coast, Is a Woman's Hair Her Head Covering?, Carrying Your Cross or Cross Dressing?, The Wardrobe of the Saints, Tattoos and Body Piercing, Judging with Righteous Judgment, Interview with Brother Michael Thomas Sambo, Seven Reasons to Believe the Seven Divine Revelations, An Open Mind that Loves the Truth, Visitation of Jesus to Samuel Oghenetaga, James Agboola Revelation of Heaven and Hell, The Refiner's Fire, Called to Be Blameless, Compelled by Love, HOREMOW Issues and Concerns, Gabriel Doufle Issues and Concerns, and the other posts in this blog available through the Eternal Destinations Directory. For a special treat, I invite you to read my daughter's poem Beauty Unfading. You may also access my complete blog directory at Writing for the Master.

Len Lacroix is the founder of Doulos Missions International.  He was based in Eastern Europe for four years, making disciples, as well as helping leaders to be more effective at making disciples who multiply, developing leaders who multiply, with the ultimate goal of planting churches that multiply. His ministry is now based in the United States with the same goal of helping fulfill the Great Commission. www.dmiworld.org.
Posted by Len at 12:00 AM