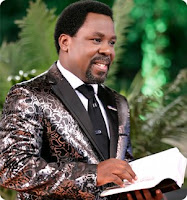 This is something I feel led to share about the so-called prophet T.B. Joshua. the pastor of "The Synagogue, Church of All Nations" (SCOAN) in Nigeria. You may not have heard of him, but he is pretty famous, and his followers across Africa esteem him very highly as one of the great preachers of our time. He was a prosperity preacher with his own Emmanuel TV channel, who operated in signs and wonders, but sadly he was secretly doing things to the people in his church that were ungodly. I had seen at least one documentary about these abominations that were happening in his church, which was based on whistleblower testimonies that were horrendous. It was essentially a cult in the truest sense of the word.

I had actually mentioned him in two of my articles, calling him out. I'll link to those at the bottom. So I was not unaware of some of the atrocities he had committed.  Nor was I ignorant to the fact that he was on course to end up in hell unless he would have repented. But because he did such a great job deceiving the people, those who follow him don't believe any bad reports about him, rather they would believe that he was a mighty man of God. For example, one viewer of the video below commented with a verse from Matthew 19 to sum up their feelings: "When his disciples heard this they said, 'Who then can be saved?'"

I didn't even realize that he had died this year at age 57. It was quite sudden and unexpected.

In this video that premiered Jun 19th, someone shares how they saw him in hell, where Jesus took them to see this man. Now he is ready to repent, but it's too late. Please watch the short video, and don't assume that I have already covered everything in written form in this post, because I have not. I have only provided an introduction to the subject, but the video contains more and different information that you need to hear.

You may watch the video right here on this blog, or you can click on the following link to watch it on Youtube.

In closing, I would like to conclude with some thoughts from someone I know who is from Nigeria. T.B. Joshua misled the masses across Africa through the false miracles that he performed, and he is still able to bewitch them even now after he has died. But true, Spirit-filled believers were and are able to discern that he was a wolf in sheep's clothing. It is a tragedy that he died without publicly repenting of his sins, but we can be sure that God gave him plenty of time to do so.

Author's note: The two articles, in which I had previously mentioned T.B. Joshua years ago, were What's Wrong with the Prosperity Gospel? and Ibrahim's Experience in Hell.

If you enjoyed this article, I also recommend reading or watching Lynn Veasley's Revelation of Hell. You are also invited to read or listen to the many, amazing testimonies of the supernatural on the Home page of this blog, some of which are listed below.  I also recommend Michael Thomas Sambo's Revelation of Heaven and Hell. You may access my complete blog directory at Writing for the Master.