There is a place near the small town of Darvaz, Turkmenistan, called “The Door to Hell” by the locals. Thirty-five years ago, geologists were drilling for gas, when suddenly they found an underground cavern.  It was so large that their entire drilling site sank deep into the hole, including all their equipment and camps. Since the cavern was filled with gas, nobody dared to go down there. Instead they ignited it, in order to burn off the poisonous gas, and it has been burning continuously now for thirty-five years. It is uncertain how many tons of gas has been burned throughout the years, but there seems to be an infinite supply there.


You can watch videos of this site below as well.
Video One

This is an amazing wonder that God has given us. Here on earth we can actually catch a glimpse of what the fires of hell must look like. But this cannot compare to what hell is really like, since we cannot see the torment and the agony of what the millions of people there are experiencing.

This reminds me of an incident that happened a long time ago in Siberia.  The Russians were drilling a hole into the earth about 14 kilometers deep, when suddenly the drill began to spin freely with no resistance.  They realized they had drilled into some sort of cavern.  So they pulled up the drill and lowered a microphone into it.  The temperature was estimated to be 2,000 degrees F, which burned up the microphone within a few seconds.  There they heard the sounds of human voices screaming in torment, and were able to capture them on tape.  You can listen to this audio recording is online.

Furnace of Fire
If you read the Scriptures, Jesus described the place of eternal damnation as a furnace of fire, where their will be weeping and gnashing of teeth.  He said, "The Son of Man will send forth His angels, and they will gather out of His kingdom all stumbling blocks, and those who commit lawlessness, and will throw them into the furnace of fire; in that place there will be weeping and gnashing of teeth." (Mat 13:41-42)

Unquenchable Fire
It's also an unquenchable fire, meaning it will never be extinguished.  John the Baptist said, ""His winnowing fork is in His hand, and He will thoroughly clear His threshing floor; and He will gather His wheat into the barn, but He will burn up the chaff with unquenchable fire."  (Mat 3:12). The people in hell are so thirsty from the heat that they are begging for a drop of water, but there is no water in hell.

Putting it All Together
There are many more Scriptures I could cite to prove that hell is real, but these few references are enough to say that it's a burning hot place that is filled with flames.  And there have been numerous people who have seen this place of torment and lived to tell about it.  I've written about some of them in my previous posts.  These include seven Colombian youths, a Nigerian pastor, named Daniel Ekechukwu, and a young lady from Ecuador, named Angelica Zambrano.  Those incidents happened in 1995, 2001, and 2009 respectively.  Some of these individuals saw flames in hell that were nine to twelve feet high.


Do I believe the "Doors of Hell" in Turmenistan is the actual opening to hell?  No.  But I think it gives us an open visual representation of what it looks like in the underworld.


My friend, I hope you will not ignore these warnings from Scripture and nature.  I hope you will know that Jesus Christ loves you, and it is not his will that anyone would perish in hell.  But he can not make that choice for you.  You must repent of your sin and put your faith in Him.

The apostle Peter preached,  "Repent, and each of you be baptized in the name of Jesus Christ for the forgiveness of your sins; and you will receive the gift of the Holy Spirit." (Act 2:38). The Lord Jesus holds the keys of hell, death, and the grave. 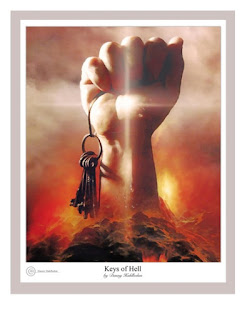 And the apostle Paul taught that "If you confess with your mouth Jesus as Lord, and believe in your heart that God raised Him from the dead, you will be saved; for with the heart a person believes, resulting in righteousness, and with the mouth he confesses, resulting in salvation. For the Scripture says, 'WHOEVER BELIEVES IN HIM WILL NOT BE DISAPPOINTED.' For there is no distinction between Jew and Greek; for the same Lord is Lord of all, abounding in riches for all who call on Him; for 'WHOEVER WILL CALL ON THE NAME OF THE LORD WILL BE SAVED.'" (Rom 10:9-13)

Don't delay another day, because there is no guarantee you will have tomorrow.

Author's note: If you enjoyed this post, please see the video A Trip to Hell.  You may also like the other posts in this blog available through the Main Directory for Eternal Destinations. You may also access my complete blog directory at "Writing for the Master." The "Keys of Hell" painting © 2012 Danny Hahlbohm, all rights reserved by the artist.

Len Lacroix is the founder of Doulos Missions International.  He was based in Eastern Europe for four years, making disciples, as well as helping leaders to be more effective at making disciples who multiply, developing leaders who multiply, with the ultimate goal of planting churches that multiply. His ministry is now based in the United States with the same goal of helping fulfill the Great Commission. www.dmiworld.org.
Posted by Len at 4:31 AM