The Holy Fires of Hell 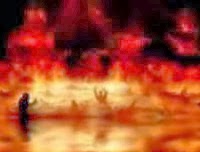 I have written previously about the Lord's holy fire in my article, Holy Fire Baptism.  And now I would like to show you something you may not have seen before in Scripture. Perhaps you have never realized that even the fires of hell are the holy fire of God, but the Bible says so.  The following verses refer to the Lord’s return and the eternal fires of damnation:

The prophet Isaiah wrote: “Behold, the name of the LORD comes from a remote place; Burning is His anger and dense is His smoke; His lips are filled with indignation And His tongue is like a consuming fire; His breath is like an overflowing torrent, Which reaches to the neck, To shake the nations back and forth in a sieve, And to put in the jaws of the peoples the bridle which leads to ruin. You will have songs as in the night when you keep the festival, And gladness of heart as when one marches to the sound of the flute, To go to the mountain of the LORD, to the Rock of Israel. And the LORD will cause His voice of authority to be heard, And the descending of His arm to be seen in fierce anger, And in the flame of a consuming fire In cloudburst, downpour and hailstones. For at the voice of the LORD Assyria will be terrified, When He strikes with the rod. And every blow of the rod of punishment, Which the LORD will lay on him, Will be with the music of tambourines and lyres; And in battles, brandishing weapons, He will fight them. For Topheth has long been ready, Indeed, it has been prepared for the king. He has made it deep and large, A pyre of fire with plenty of wood; The breath of the LORD, like a torrent of brimstone, sets it afire.” (Isa 30:27-33)

Based on this passage, we might correctly say in a loose paraphrase, "For hell has long been ready, Indeed, it has been prepared for the king. He has made it deep and large, A pyre of fire with plenty of fuel; The breath of the LORD, like a torrent of brimstone, sets it afire."  I want to emphasize that  it is the Lord’s breath that sets the flames of hell afire. Therefore, they are flames of holy fire.

Also, the apostle Paul must have been thinking of the passage in Isaiah when he wrote: “Then that lawless one will be revealed whom the Lord will slay with the breath of His mouth and bring to an end by the appearance of His coming;” (2Th 2:8)

Likewise, Isaiah said, "And He will strike the earth with the rod of His mouth, And with the breath of His lips He will slay the wicked." (Isa 11:4b)

Another passage from Moses speaks of the fires of hell as the Lord's fire. Moses sang, "For a fire is kindled in mine anger, and shall burn unto the lowest hell, and shall consume the earth with her increase, and set on fire the foundations of the mountains." (Dt 32:22, KJV).  It's a fire kindled in God's anger that burns to the lowest hell.

Hell is Real!
Hell is real!  It is no place for humans! In His mercy, the Lord has chosen to answer the prayer of the rich man of old in hell.  He has taken many people to hell and sent them back to the earth with a message for mankind, in order to warn us of that dreadful place.  I have written about so many of those testimonies in this Eternal Destinations blog, but let me just ask you to read one of those, which is Angelica Zambrano's Revelation of Heaven and Hell. She actually went to hell and experienced that place first hand on November 7, 2009, so she is able to testify firsthand that it is real!

Hell was not created by the devil, but rather the Lord created hell for the devil and his fallen angels, the demons.  They were all originally created by God to be holy angels, and they learned from God the ways of heaven.  But they rebelled and lost their place in heaven.  That is why man, who was created by God without sin, was tempted by the devil in the Garden of Eden and fell.  Man learned the ways of satan. Consequently, mankind was doomed to perish in hell with the devil and his angels.

Since this eternal fire has been prepared for the devil and his angels, as a place of torment suitable for them, we know for certain that God prepared it -- not the devil.  Therefore, it is a holy fire, not an evil one.

Do Not Perish in Hell
But the Scripture says, "For God so loved the world, that He gave His only begotten Son, that whoever believes in Him shall not perish, but have eternal life." (Joh 3:16) He gave His life for you on the cross.  He bore your sin there, shed His blood, and died.  He paid the penalty for your sin, and took your place.  And three days later, He rose from the dead.  If you truly believe in Him, you will repent of your sin, and follow Him.

You must cry out to Him for mercy and forgiveness.  You need the mercy of God, because without it you will surely perish in hell. Please give your life to Jesus.

If you truly love Him, you will obey His commandments.  "He who has My commandments and keeps them is the one who loves Me; and he who loves Me will be loved by My Father, and I will love him and will disclose Myself to him."  (Joh 14:21, NASB) And  Jesus answered and said to him, "If anyone loves Me, he will keep My word; and My Father will love him, and We will come to him and make Our abode with him. (Joh 14:23, NASB)

"Although He was a Son, He learned obedience from the things which He suffered." (Heb 5:8, NASB)

"And, once made perfect, he became the source of eternal salvation for all who obey him." (Heb 5:9, NIV).

This is why we must repent, put our faith in the Lord Jesus Christ, and live our lives obediently for Him every day.  In the final section below, I will explain how.

Attribution notice: Most Scripture quotations taken from the NASB. Most other Scriptures taken from The Holy Bible, New International Version® NIV®, unless otherwise noted.

Author's note:  Please prayerfully listen to this sister's testimony, and use the Testimony Review Process adopted by this blog, as you decide for yourself whether the Lord has spoken to her.  For issues and concerns, each person must confirm with the Lord, whether something is valid or not.

You are invited to read or listen to the many, amazing testimonies of the supernatural on the Home page of this blog, a few of which are listed below.  I also recommend reading Michael Thomas Sambo's Revelation of Heaven and Hell, The Top Ten Things Jesus Taught, Visitation of Jesus to Samuel Oghenetega, Beauty Unfading, Blasphemy of the Holy Spirit and Discerning the Things of the Spirit. You may access my complete blog directory at "Writing for the Master."

Len Lacroix is the founder of Doulos Missions International.  He was based in Eastern Europe for four years, making disciples, as well as helping leaders to be more effective at making disciples who multiply, developing leaders who multiply, with the ultimate goal of planting churches that multiply. His ministry is now based in the United States with the same goal of helping fulfill the Great Commission. www.dmiworld.org.
Posted by Len at 6:50 AM